In the Napoleonic campaigns, Denmark became involved in the war on France’s side and, after being defeated by Great Britain and Sweden in 1814, was forced to withdraw from Norway short for NOR by abbreviationfinder. The Norwegians, delighted with their supposed freedom, adopted their own constitution on May 17, 1814.

But within a few months they were forced into a new alliance, now with Sweden. A former marshal of Napoleon, Jean-Baptiste Bernadotte, ascended the throne as Charles XIV John in Stockholm. During the 19th century Norway fought for its independence. Even if the economic decline was not solely the result of neglect, life was extremely hard. The Norwegians were quite autonomous, but all complaints and requests had to be sent to distant Stockholm, the capital of Norway. The example of the revolutions in Europe fueled discontent.

Emigration seemed to be the solution and a mass exodus ensued. Between 1866 and 1875, more than 100,000 Norwegians immigrated to the United States, and in the 50 years leading up to World War I, another 750,000 people sought a new future overseas. The culture flourished again in the old homeland, which aroused patriotic feelings and a sense of national belonging. In literature, the works of Knut Hamsun and Bjørnstjerne Bjørnson in particular contributed to this, and in music those of Edvard Grieg. The playwright Henrik Ibsen, on the other hand, had no sympathy for the independence movement. Although he created a national theater, he was much more committed to a unified Scandinavia.

Around 1880 the Norwegian parliament, the Stortinget, took the initiative to “cut the cord” from Sweden. Until then, the House of Representatives had been little more than a debating club, whose decisions were often overturned by the king. In the upcoming conflicts – it was about foreign relations (since 1814 a purely Swedish matter) and shipping, Norway’s lifeline – the politicians persisted and wore down the Swedish intransigence.

Finally in 1905 the union with Sweden was dissolved and the Norwegian people voted for independence by an overwhelming majority. The parliament elected Prince Charles of Denmark as King Håkon VII on the throne. Although the wave of emigration to North America did not ebb, the economy expanded. Norway, built the fourth largest merchant fleet in the world, but lost – despite its neutrality – half of it in World War I.

World War II brought even worse strokes of fate. In April 1940 German troops invaded Norway and immediately occupied the most important ports as far as Narvik. They wanted to forestall the allies, who were also interested in the ore shipping facilities in the north. The king’s only option was to flee to exile in London.

After two months the whole country was occupied. In Oslo, the leader of a fascist group, Vidkun Quisling, took over government. His name later became the common name for traitors.
Many Norwegians tried to get into Scotland by the dangerous sea route to fight on the side of the Allies – along with most of their merchant fleet and navy. They participated in acts of sabotage against targets at home. Hydroelectric power plants and aluminum refineries were blown up. The sinking of a freighter loaded with heavy water from the Rjukan chemical works also went down in history. This act thwarted the atomic bomb plans of the Germans, who reacted with violent reprisals. Captured members of the sabotage squads and resistance fighters were executed and tens of thousands of people were sent to concentration camps. Shortly before the final surrender, the German troops finally began to withdraw. 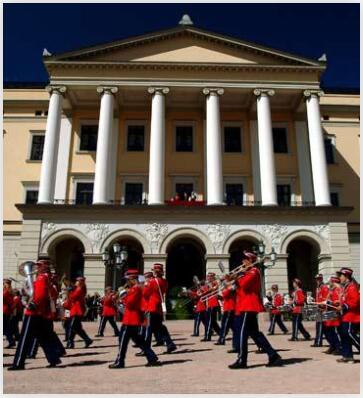 PEACE AND PROSPERITY – 1945 TO THE PRESENT

Germany surrendered on May 7, 1945; a month later, King Håkon returned to a Norway in a state of delirium. Quisling was shot together with his fascist party colleagues. Much of the land was in ruins, but the locals set about rebuilding with iron determination, so that production and trade surpassed pre-war levels within four years. Norway joined NATO in 1949. However, on the condition that no nuclear weapons are stationed on national territory in peacetime.

In 1957 Håkon VII died after 52 years of reign. He was succeeded by his equally popular son, who ascended the throne as King Olav V. He was followed in 1991 by Harald V. The Norwegians are still keen patriots: the national holiday, May 17th, is a carnival with parades in all villages and towns. All of Oslo seems to be gathering in front of the palace to greet the monarch and the royal family. In the 1970s, the economy completely changed with the discovery of oil deposits in the North Sea. Thanks to the lucrative oil business, a generous social system, an excellent infrastructure and a future fund for the time after the oil boom were created. Yet Norwegians pay high taxes. In 1972 the people rejected full membership in the EC in a vote. This decision was confirmed in 1994 with a majority vote against joining the EU. In 2005 Norway celebrated the 100th anniversary of its independence.