The question of accommodation does not arise for visitors with a tourist visa, as the commissioned tourism organization is responsible for this and is limited in its selection to the hotels provided by the government for tourists. In Ashgabat, most of these hotels are located on the southern outskirts. It is therefore advisable to insist on centrally located hotels. These tend to be a bit older, but allow you to explore the city on foot.

Visitors with a transit visa have the option of staying in hotels that are not specially built for foreign visitors. However, this entails a number of additional regulations and controls for the respective hotels, so that the overnight stay of foreign guests is occasionally refused (for various reasons).

Spending the night in private accommodation is not common for foreign visitors. Without registration and approval, the host may have considerable consequences. In order to avoid problems of your own and, above all, difficulties for the hosts, you should therefore refrain from accepting such offers without prior consultation with the organization who invited you.

Renting a private apartment is recommended for longer stays. Only those apartments may be rented for which there is a license to rent to foreigners. In addition, the rental can only be carried out by an appropriately licensed broker. The embassies of the responsible states can arrange contacts.

Such brokers can also arrange accommodation in the modern apartment complexes. The rents here correspond to those in major European cities. In addition, it must be ensured that the windows can be darkened from the inside, as representative buildings are illuminated at night and the apartments are illuminated accordingly. 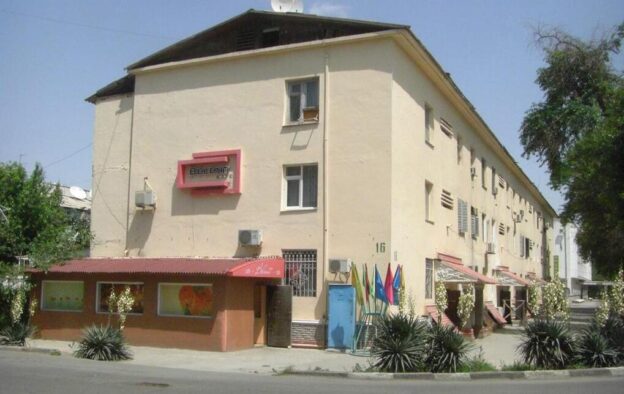 For foreign visitors, the supply situation in Turkmenistan is generally good. Imported goods can also be found in the capital’s shops, every city has a bazaar with fresh goods, and even the small, remote settlements in the desert have shops with a limited selection of staple foods.

The cost of living depends heavily on the desired lifestyle. Even before the current economic crisis, the costs of western imported products were generally well above the typical costs of corresponding products in Europe. Maintaining a largely western standard of living, for example with food, hygiene products and clothing, is therefore possible in Turkmenistan (assuming the availability of the relevant products), but is significantly more expensive than it would be in Europe. Since the beginning of the economic crisis, many imported products are no longer available, so that the basic possibility of purchasing western products is severely restricted. The remaining imported goods have become many times more expensive, so that only the absolute upper class of the country can afford imported consumer goods. the display of which has thereby also become much more of a status symbol. On the other hand, they are cost of living with adaptation of a local lifestyle extremely low.

Also extremely expensive for foreigners (and largely unaffordable for Turkmen) are all those products that the government does not want to use. These include the Internet, cigarettes, and long-distance and international calls.

The basic Turkmenistan drink is green tea. This is served at any time of the day or night. Green tea is available in all hotels at all times, and every car on the Turkmenistan Railway has a large boiler with always boiling water and a conductress who can supply the travelers with green tea. Although the majority of Turkmenistan is Muslim, alcoholic beverages are not outlawed; on the contrary, they are an integral part of many meals at noon. Almost every shop offers a wide selection of vodkas, from very cheap variants to extremely high-quality products, which are also correspondingly more expensive at 6 to 9 euros per liter. However, the regional environment should be taken into account when consuming alcohol. So there are population groups who reject alcohol and expect corresponding behavior from visitors. Tap water – if available – should be boiled. The same applies to water from the water transporters and well water. Coffee is usually drunk in the form of ready-to-use mixes – the portions are already sweetened and contain milk powder. Brewed coffee, espresso or other coffee variations can only be found in a few selected restaurants in the capital.

Turkmenistan is a country that does not make life easy for vegetarians. Apart from a few side dishes (cucumber or tomato salad, bread, rice), no vegetarian dishes are usually served. Often fresh flatbread is a side dish to almost every dish, sheep meat is usually the central component. In every larger settlement there are shish kebab stands, which usually serve at least two types of meat: grilled kebab (meatballs) and shish kebab (pieces of mutton). The meat is garnished with fresh herbs (dill, coriander, chives, parsley) and served with bread or rice. Depending on the season, grilled or fresh tomatoes and small pickles complement the dish. Fish dishes are available along the coast.

The snack bars near the Russian Bazaar in the capital offer a wider range of dishes.

Very good restaurants (where coffee is also available by the way) are the Belent Kafe in the basement of a residential building from the 1960’s (see picture above) and the luxury restaurant on the top floor of the commercial center on the southern edge of Independence Park. The high-rise is easily recognizable from its facade made of blue mirrored glass surfaces. From here there is an excellent view over the city and the Kopet Dag mountains at any time. The numerous illuminated facades make the sight after sunset particularly attractive.

In case of an emergency there is a small shop in almost every hotel where you can get the essentials. These include soft drinks, instant coffee, green tea, candy, chips and simple hygiene items.

In addition, it should be noted that the catering establishments are either directly owned by the state or are under state control. You will look in vain for hidden trendy pubs and hip hints in the form of rustic or unusual restaurants. The restaurants do not participate in cultural life (for example in the form of poetry slams, poetry readings, themed evenings or the like). Accordingly, the various restaurants are similar and can basically be assigned to two categories: the higher-priced establishments geared towards foreigners, which, in addition to some typical dishes, offer predominantly international food and, at least in the capital, can sometimes also serve exotic specialties such as fine Georgian wines or fresh Armenian herbs.

Most of the restaurants offer (not always hygienically impeccable) cheap everyday food and serve an almost exclusively Turkmenistan audience. Attention! In the company of a government tour guide, it is usually only possible to visit the restaurants run for foreigners. Attempting to visit other restaurants can lead to astonishment or annoyance, depending on the temperament of the companion.

The state food cooperative ASA is responsible for the manufacture of a large number of different products that can be purchased in all major shops in the country (see extracts from the ASA advertising brochure below). In addition, a selection of different fresh products can be found in the bazaar in every city. Depending on the season, the choice is greatest from June to October. Turkmenistan enjoys a (justified) excellent reputation in all countries of the former Soviet Union for the quality of its water melons, honeydew melons and grapes. If possible, these should definitely be tried.

A larger selection of imported products can be found at the dealers in the vicinity of the Russian Bazaar in Ashgabat. This bazaar is generally a little more expensive than the other bazaars in the capital, but it also offers a greater variety of products. For everyday goods, the advertised fixed prices apply in any case. The prices of numerous products are also set by the state and are not subject to the pricing sovereignty of the seller. The Yimpash Shopping Center offers the country’s largest selection of (correspondingly more expensive) imported goods. There are several fast food shops on the upper floor.

The shop on the ground floor of the trading center on the southern edge of Independence Park also offers a larger selection of imported goods (see above).